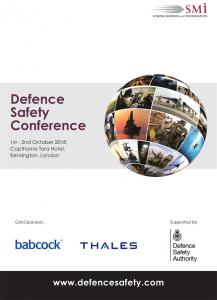 LONDON, UNITED KINGDOM, May 29, 2018 /EINPresswire.com/ — SMi Group is delighted to announce that the Defence Safety Conference will feature high level briefings from senior leaders of the UK Armed Forces.

Their exclusive presentations will draw from operational feedback, training, requirements and equipment specifications.

Lieutenant General Richard Felton CBE, Director General, Defence Safety Authority, UK MoD described the event: “I believe this will be the first conference of its type, with a specific focus on Defence Safety. I hope the rationale for the conference will convince you of its value and the opportunity it offers your organisation as a platform to promote and discuss how we can together drive the continuous improvement in safety that we all seek. This SMi conference is being run with the support of the UK’s Defence Safety Authority (DSA).”

The two-day event (1-2 October 2018) will bring together senior leaders from across the UK Armed Forces and its international partners and allies. The speakers have been carefully selected from 10 nations to cover the broad spectrum of safety across Military Aviation, Land and Maritime. The very latest technology innovators will also be present to share their ground-breaking equipment and services with a captive audience all looking to advance their safety programmes.

The full speaker line-up and presentation details have been released and are available to download from: http://www.defencesafety.com/einpr

For those looking to attend the Defence Safety conference in London this Autumn, contact Sadia Malick on: +44 (0) 207 827 6748 or email: smalick@smi-online.co.uk

ABOUT SMI GROUP: Established since 1993, the SMi Group is a global event-production company that specializes in Business-to-Business Conferences, Workshops, Masterclasses and online Communities. We create and deliver events in the Defence, Security, Energy, Utilities, Finance and Pharmaceutical industries. We pride ourselves on having access to the world's most forward-thinking opinion leaders and visionaries, allowing us to bring our communities together to Learn, Engage, Share and Network. More information can be found at http://www.smi-online.co.uk