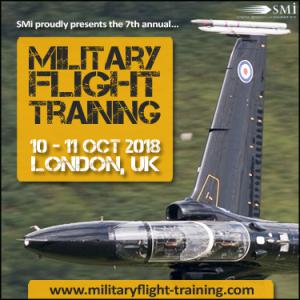 LONDON, UNITED KINGDOM, August 31, 2018 /EINPresswire.com/ — In less than 2 months, international military representation from all over the world will be coming together in London for the 7th annual Military Flight Training conference on the 10th and 11th October, to discuss the latest developments in the world of flight training.

The two-day conference is set to host high-ranking military experts from leading countries such as the US and Canada, who will be giving their perspectives on the latest training programmes and tactics covering fast jet, rotary wing, fixed wing, and joint force platforms, as well as the use of new simulators.

Featured US and Canadian speakers and their respective presentations:

• Standardising the flight training for a variety of operational scenarios
• Countering interoperability roadblocks to ensure continued international cooperation
• Balancing cost, live and synthetic training priorities
• Flight training in five years – where to next?

Attendees will have the opportunity to benefit from two days of unrivalled networking opportunities, interactive panel debates, and in-depth presentations from expert military speakers.

View the latest agenda and speaker line-up, as well as other exclusive content on the event website. Book by 31st August and receive a £200 discount, register here http://www.militaryflight-training.com/einpr