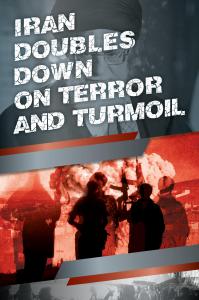 Iran Doubling Down on Terror and Turmoil

Doubling Down on Terror and Turmoil details the role of agencies and senior Iranian officials involved in the decision-making in a new wave of terrorism against Iranian dissidents in U.S. & Europe.”
— NCRI-US

WASHINGTON, DC, USA, October 29, 2018 /EINPresswire.com/ — National Council of Resistance of Iran – U.S. Representative Office (NCRI-US) will roll out a new book, Doubling Down on Terror and Turmoil, which details the role of the most senior Iranian regime officials in a new wave of terrorism against Iranian dissidents in the United States and Europe. It will also unveil the agencies involved in the decision-making and execution of terror operations.

The Iranian regime has devised a sophisticated scheme to retain billions of dollars in revenues from oil and gas exports to continue its crackdown at home, wreak havoc in the Middle East and carry out assassinations against Iranian dissidents abroad.

To discuss Tehran’s malign behavior, its tactics and role in recent terrorist plots, NCRI–US invites you to a media briefing on:

Registration is required to attend this event. To rsvp, please click: goo.gl/X3Yax4