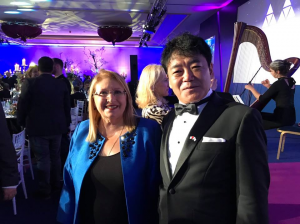 G8C chartered the VIP investors’ lounge as well as the entire registration desk area and the 25-metre-long, 2-metre-high ‘Mega Wall’

Through our “Anti-ICO,” we are dedicated to building a transparent approach to creating value through blockchain platforms, in an entirely new way”
— Juliet Adelstein, COO

ST. JULIAN'S, MALTA, November 10, 2018 /EINPresswire.com/ — The highly anticipated Malta Blockchain Summit kicked off last week, from November 1st, in a bigger way than anyone had expected. The first day of the summit, held at the Intercontinental, saw in excess of 8,500 registered attendees, with over 300 companies exhibiting and a whole host of well-known thought leaders giving talks.

The event is said to have been the most highly attended in the blockchain sector this year, in true reflection of Malta’s current status as the world-leading Blockchain Island. The title is not undeserved, with the island welcoming the relocation of top cryptocurrency exchanges such as Binance, and many more blockchain companies following suit, as a result of the July passing of three regulatory bills.

With this, Malta has succeeded in offering a welcoming, secure environment in which to operate for blockchain-based businesses, and as last week’s Blockchain Summit proved, it has managed to become the frontrunner of blockchain technology.

Among the many talking points of the two-day summit, one name in particular seemed to have significant coverage across the venue. G8C, or GanaEight Coin Limited, partnered with Malta Blockchain Summit to promote its new ICO, known as the G8C token. G8C chartered the VIP investors’ lounge, an exclusive space for private meetings, as well as the entire registration desk area and the 25-metre-long, 2-metre-high ‘Mega Wall’ – an unmissable brand exposure opportunity running alongside the main conference room.

G8C claims to be the instigator of the evolution of online casino into blockchain. It offers a new approach to iGaming by producing a token of stable value, which can be bet directly onto its very own original blockchain platform.

GanaEight Coin Limited’s COO, Juliet Adelstein, explains the concept of G8C and the intriguing term, “Anti-ICO,” used to describe it: “At GanaEight Coin, we believe the trend of listing tokens on exchanges simply to artificially inflate their value is over. Through our “Anti-ICO,” we are dedicated to building a transparent approach to creating value through blockchain platforms, in an entirely new way.”

It was undoubtedly not the first time hearing of G8C for many at the summit, as the token was launched in impressive fashion on October 30th at its own spectacular party at Palazzo Parisio in Naxxar. The launch was attended by hundreds of blockchain and iGaming VIPs, as well as Maltese government officials showing their support for the project. G8C’s presence was felt yet again at the following evening’s Malta Blockchain Awards, where the company sponsored two awards and was nominated for ICO of the Year.

With its innovative approach to blockchain, G8C’s prominent attendance at the Malta Blockchain Summit will almost certainly not be the last we see of it for the foreseeable future.