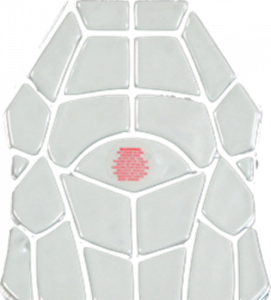 In June of 2017, Zoombang® Protective Gear (www.zoombang.com) sent the ZB-7 Ballistic Trauma Pad to Chesapeake Testing, a leading Ballistics testing laboratory, for an independent third-party testing of the ballistic resistance of the samples in accordance with NIJ-STD-1010.06 Level IV (modified). The testing results confirmed that the ZB-7 Trauma pad captured up to 93% of the energy not absorbed by the body armor. While the test results varied by the caliber of the projectile, the pad’s results confirm the effectiveness of the ZB-7 Trauma Pad when used in conjunction with body armor, adding to the level of efficiency already exhibited by the body armor.

The ZB-7’s unique polymer composition is capable of a very high degree of energy/force dissipation and derives its superior energy adsorbing behavior from the unique physical properties of the viscoelastic compound. The bulk of the compound is composed of a high molecular density, highly viscous, highly elastic polymer fluid. The fluid is then compounded with rheological modifiers and other fillers to control the physical and rheological properties of the finished padding compound.

The ZB-7’s slim and ultralight non-Newtonian polymer decreases blunt force trauma by decreasing back face deformation through absorbing and disrupting the kinetic energy of a bullet’s impact to reduce the blunt trauma transferred to the wearer of the vest. A back-face signature injury occurs when the body armor retains the round, but does not effectively dissipate the energy efficiently, causing a narrow section of the armor to deform backward into the body, causing injury. The key attribute in the Zoombang® proprietary polymer is the way it responds to this energy. When force or energy is applied to it, the molecular structure changes and it behaves as a solid, then immediately reverts back to its soft and conformable state the moment the energy is dispersed.

The decrease in viscosity does not greatly affect the efficacy of the material as padding. Even a standard ZoomBang® polymer compound still has a high enough viscosity to dissipate impact energy at elevated temperatures. Testing of the material for use as a ballistic trauma pad (inserting a pad behind a bullet proof vest and shooting a round into it) showed no measurable difference over a temperature range of 20 – 35C. The compound is remarkably stable over a large range of temperatures and will not freeze above -100C.

Zoombang’s President and CEO Joseph Scott believes the best opportunity for accelerated growth will be in the police/military side, as the protective qualities of their polymer represent a valuable addition to body armor. “The field testing performed in 2014 and the Chesapeake Lab testing of 2017 have substantiated our assumptions,” Scott continued, “I understand the gravity in promoting unprecedented results, particularly in this arena, where lives are literally on the line, so I felt it was vital to prove my confidence in the ZB-7 Trauma Pad, in an undeniable fashion.” In April 2015 Mr. Scott did just that, while visiting a client in Bogota, Colombia, the CEO put on a bullet proof jacket, slid in a Zoombang® ZB-7 Trauma Pad and stepped in front of a .38 Caliber Pistol. At pointblank range, Mr. Scott took a bullet, and without a flinch, proved not only that his product works but that he truly stands behind it. “The video of me getting shot has garnered thousands of views on YouTube and has significantly increased awareness.”

Independent third-party testing was completed at Chesapeake Testing, a NTS Company on June 9, 2017. The objective of the test was to conduct a ballistic resistance test in accordance with NIJ-STd-0100.06 Level IV (modified).