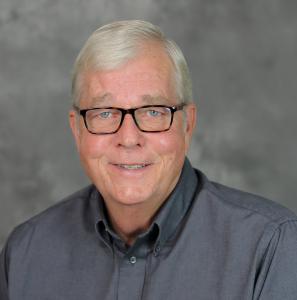 Striking Eight Bells focuses on George’s story on board a U.S. Navy destroyer during the closing period of the Vietnam War. Formerly an Iowa farm boy, George had been married less than a year when his draft number was about to come up for military service. Rather than escape the draft, George decided to enlist in the U.S. Navy and travel across the globe to fight in America’s most unpopular war.

Striking Eight Bells: A Vietnam Memoir was released on February 21, 2018 by Richter Publishing. In his book, Trowbridge describes leaving his wife and new born behind, along with his idyllic Midwestern life, George entered an accelerated training program and was promptly assigned to USS Rich (DD 820), a World War II era destroyer, called a “tin can” by sailors. Soon, he and his crew found themselves thrown into the chaos of battle as they patrolled the infamous Gulf of Tonkin.

On the other side of the world from their families, the crew members were forced to make the most of their situation aboard the cramped destroyer. They were subjected to everything from the heat of the Pacific to deadly typhoons that threatened to sink them all.

Many readers, sailors and history buffs alike agree that in Striking Eight Bells, George transports you through time and space, until you feel like you’re sitting right there beside him. You will feel every roll of the ship, taste every bland meal, and hear every blast of the artillery shells being launched into the murky jungle of Vietnam. Read as comedic moments of brotherhood quickly turn into battle as enemy shells crash into the water and explode around their “tin can.”

In a world filled with books about ground forces in Vietnam, read a refreshing first-hand account about a side of the war that has rarely been told.

“Striking Eight Bells,” can be purchased at Amazon.com: Books, Barnes and Noble, Books-A-Million, Smashword.com eBooks and anywhere books are sold.

About George Trowbridge – George retired from the U.S. Navy in 1992. He sailed for several years as a Merchant Marine Officer on board various commercial merchant vessels. His experiences working on board merchant vessels prompted him to become a training provider for the maritime industry. George has founded two maritime training institutions and has managed two other similar institutions in the Gulf of Mexico region. He has also authored numerous books on various topics like ship navigation technologies and leadership skills for officers. George currently resides in Largo, Florida.