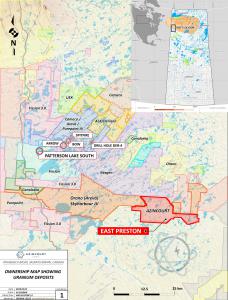 The initial interpretation of this new survey data has added an additional 7.5 to 10 km along two of the same prospective previously-known conductive trends. There are offset breaks in the conductor trends with multiple, discreet conductors interpreted (see Figure 1).

"The first look at the recent VTEM survey has confirmed we will be adding to the already robust target inventory at East Preston," said president & CEO, Alex Klenman. "What that target list ultimately looks like will be determined by the results of the data interpretation that is now underway, but we are encouraged at the growing prospectivity of the project. East Preston already has dozens of quality drill targets, so we’re pleased at the latest development," continued Mr. Klenman.

The survey was conducted between January 23 and February 6, 2019 and completed survey coverage over the entire 25,000-ha project area. This survey consisted of 498 line-km with 300 m line spacing and 1,000 m tie-line spacing – identical parameters to the previous VTEM™ Max survey, and ties directly into the previous flight lines. Flight lines are oriented NW-SE, perpendicular to the NE-SW trending structural and conductor trends of the basement rocks at East Preston.

Geotech, the survey provider, is finalizing final reports, but has completed data processing and has provided a merged dataset covering the entire East Preston project by combining the newly acquired VTEM survey data with the original VTEM data coverage. In-depth interpretation is on-going by Bingham Geoscience, geophysical consultants to Azincourt. Results of the interpretation will be reported once received and reviewed.
More in-depth interpretation is on-going and will be used to add to the East Preston target inventory for future exploration drill testing.

Azincourt is currently earning towards 70% interest in the 25,000+ hectare East Preston project as part of a joint venture agreement with Skyharbour Resources (TSX.V: SYH), and Clean Commodities Corp (TSX.V: CLE). Extensive regional exploration work at East Preston was completed in 2013-14, including airborne electromagnetic (VTEM), magnetic and radiometric surveys. Three prospective conductive, low magnetic signature corridors have been discovered on the property. The three distinct corridors have a total strike length of over 25 km, each with multiple EM conductor trends identified. Ground prospecting and sampling work completed to date has identified outcrop, soil, biogeochemical and radon anomalies, which are key pathfinder elements for unconformity uranium deposit discovery.
The Company completed a winter geophysical exploration program in January-February 2018 that generated a significant amount of new drill targets within the previously untested corridors while refining additional targets near previous drilling along the Swoosh corridor.

Ground-truthing work confirmed the airborne conductive trends and more accurately located the conductor axes for future drill testing. The gravity survey identified areas along the conductors with a gravity low signature, which is often associated with alteration, fault/structural disruption and potentially, uranium mineralization. The combination/stacking of positive features has assisted in prioritizing targets.
The Main Grid shows multiple long linear conductors with flexural changes in orientation and offset breaks in the vicinity of interpreted fault lineaments – classic targets for basement-hosted unconformity uranium deposits. These are not just simple basement conductors; they are clearly upgraded/enhanced prospectivity targets because of the structural complexity.

The targets are basement-hosted unconformity related uranium deposits similar to NexGen’s Arrow deposit and Cameco’s Eagle Point mine. East Preston is near the southern edge of the western Athabasca Basin, where targets are in a near surface environment without Athabasca sandstone cover – therefore they are relatively shallow targets but can have great depth extent when discovered. The project ground is located along a parallel conductive trend between the PLS-Arrow trend and Cameco’s Centennial deposit (Virgin River-Dufferin Lake trend).

Drilling commenced in March of 2019, testing the first few priority targets to depths between 150 and 200 meters. Results of the first few holes are pending and will be announced once received, reviewed and verified.

The technical information in this news release has been prepared in accordance with the Canadian regulatory requirements set out in National Instrument 43- 101 and reviewed on behalf of the company by Ted O’Connor, P.Geo. a director of the Company, as well as a qualified person.

Azincourt Energy is a Canadian-based resource company specializing in the strategic acquisition, exploration and development of alternative energy/fuel projects, including uranium, lithium, and other critical clean energy elements. The Company is currently active at its joint venture East Preston uranium project in the Athabasca Basin, Saskatchewan, Canada, and the Escalera Group uranium-lithium project located on the Picotani Plateau in southeastern Peru.

ON BEHALF OF THE BOARD OF AZINCOURT ENERGY CORP.

Neither the TSX Venture Exchange nor its regulation services provider (as that term is defined in the policies of the TSX Venture Exchange) accepts responsibility for the adequacy or accuracy of this release. This press release includes “forward-looking statements”, including forecasts, estimates, expectations and objectives for future operations that are subject to a number of assumptions, risks and uncertainties, many of which are beyond the control of Azincourt. Investors are cautioned that any such statements are not guarantees of future performance and that actual results or developments may differ materially from those projected in the forward-looking statements. Such forward-looking information represents management’s best judgment based on information currently available. No forward-looking statement can be guaranteed, and actual future results may vary materially.