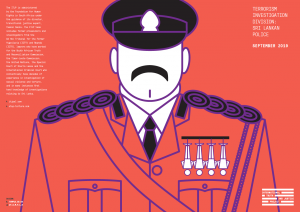 A new report on the Terrorism Investigation Division of the Sri Lankan Police.

GENEVA, SWITZERLAND, September 17, 2019 /EINPresswire.com/ — Successive Sri Lankan governments, including the current one, have repeatedly promoted policemen whom they knew were alleged to be involved in torture. A new study by the International Truth and Justice Project (ITJP) focuses on the Terrorism Investigation Division (TID) of the Sri Lankan police and has identified 58 alleged torturers, including those in command positions, named by the 73 victims interviewed. Among them are police officers identified in UN reports dating back more than a decade; one was even a UN peacekeeper.

“The indifference to repeated allegations of police torture is shocking and makes a mockery of Sri Lanka’s stated commitment to security sector reform, let alone transitional justice,” said the ITJP’s Executive Director, Yasmin Sooka. “TID officials allegedly involved in torture were named by a UN expert in 2007, by a UN investigation in 2015, by Sri Lankan NGOs and human rights lawyers for decades and now in 2019 by the ITJP in court documents submitted in California in support of the case under the Torture Victims Prevention Act against former defence secretary Gotabaya Rajapaksa – but no action is ever taken. The alleged torturers continue to survive every regime change”

The new report by the ITJP details systematic brutal torture and sexual violence against men and women detained over the last decade by the TID, focusing on the TID office in Colombo and detention site in Boossa in Galle. The report can be read with the 24 dossiers on individual policemen named by victims which forms part of a US court submission in the Gotabaya Rajapaksa case filed by Hausfeld law firm in the US .

“Torture is so endemic in the Terrorism Investigation Division that it is impossible for anyone working in this unit not to have been complicit,” said Ms. Sooka. “Until the alleged perpetrators are prosecuted, members of the TID should be barred from international training programmes, UN peacekeeping and other forms of international assistance. Training programmes alone will not address the rot in this unit of the security forces.”

Detainees describe being chained together and bused to TID sites or abducted in white vans, stripped naked, subjected to anal examinations, interrogated in rooms equipped for torture with blood stained walls, forced to confess to things they hadn’t done and warned not to tell inspectors about the torture. The seventy three victims in the report, who include twenty-one civilians, describe being beaten, kicked, punched, whipped, suspended in stress positions, asphyxiated with plastic bags soaked in petrol and chilli, subjected to water torture, burned with cigarettes, branded with hot metal rods, and subjected to rape and other forms of sexual violence. Some were held in multiple detention sites run by different security units for years; others abducted by the TID after being released from prison or the “rehabilitation” programme for ex combatants. At least twenty of the victims interviewed attempted suicide after the torture.

“There is an idea prevalent in some quarters that alleged terrorists do not enjoy the same human rights as civilians deemed ‘innocent’. This echoes the earlier justification asserted by Sri Lanka in 2009 that as they were fighting an asymetrical war, the laws of war should be suspended targeting innocent civilians. This is not only unlawful but morally repugnant. All Sri Lankans should be loudly raising their voices against the horrific and systematic abuses detailed in this report. The decade of silence however is deafening,” said Ms. Sooka.

Among those alleged perpetrators who should immediately be suspended and investigated are:

Nandana Munasinghe, the current Senior Deputy Inspector General of police for the North Central & North Western Province, who was named by a UN Special Rapporteur on Torture in 2008 as allegedly involved in torture; (Exhibit B, Anonymity Declaration, ITJP website, Pages 89-93);

Adambarage Ruwan Prasanna Jayak De Alwis, previously TID Director and now with the Colombo Crimes Division, identified by 10 victims in this report and named in 1998 in an NGO report. (Exhibit B, Anonymity Declaration, ITJP website, Pages 43-56)