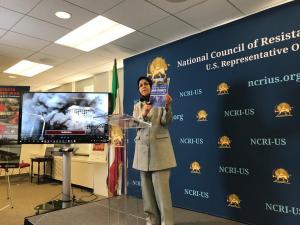 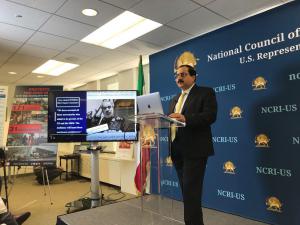 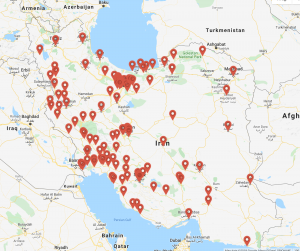 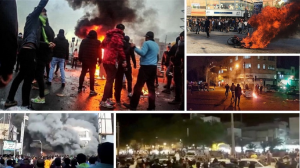 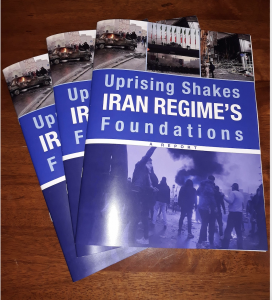 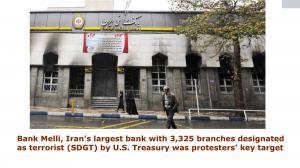 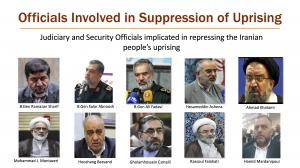 By ordering the ruthless killing of the protesters, Khamenei has expedited the process of his regime’s overthrow.”
— Soona Samsami

WASHINGTON, DC, US, November 28, 2019 /EINPresswire.com/ — On Tuesday, November 26, 2019, the US representative office of the National Council of Resistance of Iran (NCRI-US) held a press conference in Washington, coinciding with its release of a 60-page report on the uprising seeking regime change in Iran, which began on November 15.

Soona Samsami, the NCRI’s US representative, introduced the report, entitled “Uprising Shakes Iran Regime’s Foundation,” and announced that according to the latest casualty figures provided by the MEK’s Resistance units inside Iran, over 450 protesters have so far been killed, 4,000 more wounded and over 10,000 detained by the regime’s multitude of repressive forces in over 179 towns and cities which represent all of Iran’s 31 provinces. The identities of 154 martyrs for freedom have so far been determined and their names released.

Providing context for the unprecedented level of brute force used by the regime to quash the uprising, Ms. Samsami said: “The mullahs’ regime is facing an impasse and the crisis of overthrow. It has found its only recourse in suppression and killings. But in the end, Iran’s dictators will see the opposite results from their policies. By ordering the ruthless killing of the protesters, Khamenei has expedited the process of his regime’s overthrow. Hassan Rouhani put aside his election-time moderate posturing and called for the suppression of the people.

“The crimes carried out by the Iranian regime against our people are by any measure crimes against humanity. World governments and the international community must set aside all considerations and reservations about the regime. They should demand an immediate halt to the killings and arrests. If the regime does not comply, they must readily pull the trigger of UN Security Council sanctions,” she added.

Alireza Jafarzadeh, NCRI-US’ Deputy Director, explained that the symbols of the regime’s suppression, theft and corruption were attacked by protestors. All these properties were affiliated with the IRGC or Khamenei. State-run gas stations and banks linked to the IRGC and the Supreme Leader, security forces’ vehicles, Bassij centers, state-run seminaries and offices of mullahs affiliated with Khamenei were targeted by the protesters, who have suffered decades of suppression and the thievery of their wealth. People also destroyed or set fire to large posters of Khamenei and those of his predecessor, Khomeini.

Jafarzadeh added that the slogans most chanted by protesters were: “Death to Khamenei,” “Death to the Dictator,” and “Death to Rouhani.” The slogan, “Our enemy is right here; they lie when they say it’s America,” clearly shows that the people hold solely the regime responsible for their economic miseries.

The NCRI-US official noted that the newly published report on the uprising divulges the identities and pictures of 87 key officials involved in the murderous suppression of the protests in seven provinces, scenes of the most significant, widespread, and pervasive protests: Tehran, Alborz, Khuzestan, Fars, Isfahan, Kurdistan, and Kermanshah.

Jafarzadeh said that Resistance units of the MEK played a key role during the uprising. These Resistance units were formed several years ago and have spread throughout the country. They have a wealth of experience gained on the ground. Statements by the regime’s officials also attest to this fact.

Jafarzadeh provided the main takeaways from the nationwide uprising which by all indications has shaken the regime’s foundations. They are:
1. The uprising showed that overthrow of the regime is attainable, as people targeted main symbols of repression, theft, and corruption.
2. The people consider the regime and all its factions as illegitimate.The people are ready to pay the price to unseat the ayatollahs.
3. The utter weakness of the regime, manifested by its barbaric and rampant use of brute force, as well as its shutting down the internet, was on display.
4. The gains of the uprising are irreversible and no matter how deep or wide the state suppression, the unrest will continue.
5. The role of the organized opposition exemplified by the Resistance units and councils formed by the MEK was key and will continue until the regime is brought down.

Jafarzadeh concluded his remarks by calling for the following measures to be taken by the international community:
● The slaughter of protesters is a clear case of a crime against humanity. Therefore, the United Nations Security Council, and governments should take urgent action to halt the killings and suppression and secure the release of political prisoners.
● Investigative missions must be sent to Iran to evaluate the scope of the crimes and examine the cases of those killed, wounded and/or detained.
● The leaders of the regime, e.g., Supreme Leader Ali Khamenei and President Hassan Rouhani, must be held accountable for crimes against humanity.
● The United States should sanction Western companies that aid the Iranian regime with the sale and provision of services and products that enable it to monitor, control, and block internet access by Iranian citizens. While adopting all measures necessary to diminish and disable the regime’s capacity to block internet traffic, the United States should provide safe, secure, and uninterruptible internet access to Iran’s people, including the protesters.
● It is time for the world to recognize the right of the Iranian people to change the repressive regime and establish a democratic, pluralistic and non-nuclear republic based on separation of religion and state.