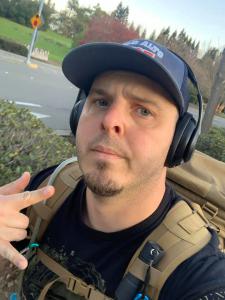 John Preston kicks off the hike with a ceremony at Palo Alto City Hall, beginning 9:00 AM.

PALO ALTO, CA, USA, January 8, 2020 /EINPresswire.com/ — Palo Alto Firefighter, USMC Veteran, and Top 20 Sony recording artist John Preston will be hiking 22 miles a day, carrying 22 kilos, over 28 days. His journey will take him from Palo Alto down to the U.S.S. Midway in San Diego. Silver Rose Entertainment, Inc. (SRE Studios) will film the hike and produce the documentary through Veteran Powered Films, the production company’s initiative to employ veterans and first responders through all aspects of film and media production. Along the hike, the team will also raise money for nonprofits that benefit veterans.

The hike will start with an event at Palo Alto City Hall on January 13th at 9:00 AM. This is a significant date for Preston, who lost his brother Michael, also a USMC veteran and Police Officer, to suicide on January 13th, 2016. The day will start with a ceremonial raising of the American flag and a gathering to remember our Fallen, as well as to honor those who continue to carry the weight, even long after their loved ones have lost their lives. The hike will start at approximately 10:00 AM. Bonnie-Jill Laflin, from KNBR and NBC Sports, will be joining the event on the first day of the hike. Her nonprofit, Hounds for Heroes, is one of the organizations that will benefit from the fundraising of the hike.

The goal is to create a documentary, titled "22 and You" that inspires people who struggle with mental health. “We’re focused on veterans and first responders because that’s the world that most of our team knows, but ultimately mental health is an issue that affects everyone and the message we’re creating is for anyone who is fighting this battle,” says SRE Studios producer Micah Haughey.

In addition to filming the hike, Preston and Veteran Powered Films will be inviting special guests to share their stories on camera of how mental health issues have affected their lives.

Silver Rose Entertainment founder Julia Ling will be directing the documentary. “Mental illness is an epidemic that nobody wants to talk about, and yet it is more prevalent than ever. We want to do everything we can to help carry the weight, help our first responders and veterans heal, help prevent further suicides in children and others who are struggling. And we at SRE Studios and Veteran Powered Films are going to hire as many veterans as possible through the whole process,” Ling says.

The hike ends the evening of February 9th in San Diego. The team hopes to celebrate the Grand Finale at the U.S.S. Midway. The ending celebration gives the idea that life goes on, that through all challenges we can prevail and come out stronger, and that great things can continue to be achieved.