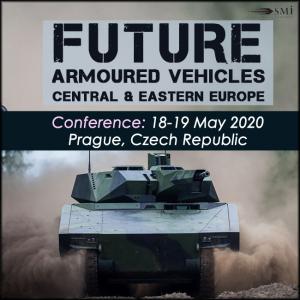 PRAGUE, CZECH REPUBLIC, January 9, 2020 /EINPresswire.com/ — SMi Group is delighted to announce the return of Future Armoured Vehicles Central and Eastern Europe 2020, commencing on 18th and 19th May in Prague, Czech Republic for its 6th year running.

With regional nations overhauling their legacy equipment to bring their combat vehicles in line with current allied capabilities, Future Armoured Vehicles CEE 2020 will provide a critical insight into what requirements are being pursued by regional armed forces, reinforcing interoperability and cooperation.

For interested parties, an early bird discount of £400 for bookings made by 31st January is available online at http://www.futurearmouredvehicles.com/EINPR1

Key focuses for 2020 include:
1. Developing the Czech Armed Forces as they outline their IFV procurement plans (choosing between the CV90, ASCOD or LYNX) in a bid to modernise their land forces by 2026.
2. Main battle tank systems evolution – extending the capability of European ground manoeuvre.
3. Leveraging technological solutions to drive interoperability.
4. Developing ground force doctrine to adapt and overcome adversary threats.

The event brochure with the two-day agenda and full speaker line-up is now available to download, please visit http://www.futurearmouredvehicles.com/EINPR1

Sponsorship is now open for the conference. Should you wish to speak or exhibit at the event, please contact Sadia Malick on: +44 (0) 20 7827 6748 or smalick@smi-online.co.uk