Using its patented advanced positioning analytics to map an image in real time, Ubihere can pinpoint exact locations through 2D and 3D technology, giving immediate insights into various aspects of an organization. 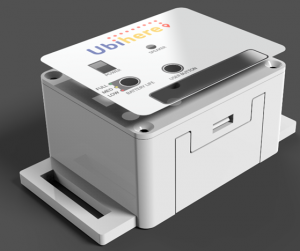 Ubihere’s Ubitrax tag provides accuracy of location both indoors and outdoors.  Easily attached and removed.  The next generation of RTLS.

COLUMBUS, OH, USA, October 21, 2020 /EINPresswire.com/ — Converge Ventures, an accelerator and startup incubator based in suburban Columbus, Ohio that commercializes academic research and development, on September 30 deployed a $500,000 investment into Ubihere, a company that develops innovative real-time location systems (RTLS), which enable accurate, to-the-second inventory tracking and management in a wide variety of environments and conditions. The company was founded by Dr. Alper Yilmaz, a professor of geoinformatics at The Ohio State University, where he is also the head of the university’s Laboratory for Photogrammetric Computer Vision. The Converge Ventures investment will support Ubihere’s execution of a recently awarded contract from the Air Force’s SBIR program.

“Ubihere is a great example of the innovation that is being pioneered in Ohio, and we are proud of Converge Ventures’ early investment in this groundbreaking company,” says Michael Minihan, board member of Converge Ventures. “Ubihere’s success is in sprint mode now, with the Air Force Phase II SBIR contract now working towards implementation in 2021.”

Ubihere’s core technology uses proprietary multi-sensor hardware tracking tags and artificially intelligent software to pinpoint a given object’s movement and position in real time and with a much superior degree of accuracy compared to legacy real-time location systems. As Ubihere’s first military customer, the US Air Force’s 7th Bomb Wing, located at Dyess Air Force Base outside of Abilene, Texas, is adopting the company’s Ubitrax commercial product to keep track of nearly 1,000 pieces of equipment across a 6,409-acre base. Upon successful completion of the Phase II SBIR project, the Air Force has indicated a desire to purchase the system for six additional bases in 2021.

“The Ubihere team has taken great strides in meeting development milestones to position us to deliver our Ubitrax tag solution to Dyess Air Force Base in 2021. The capital from Converge Ventures will help us achieve these goals,” says Dr. Yilmaz. “At the same time, we are continuing to strengthen relations with the government and other key industry stakeholders, paving the way to strong returns and success moving forward.”

Before launching Ubihere, Dr. Yilmaz had worked for the US Department of Defense, Department of Energy, and NASA on several projects to locate people and analyze data in GPS-impermeable environments such as remote, mountainous terrain; and in extraterrestrial environments such as on Mars. Dr. Yilmaz is a senior member of the US National Academy of Inventors and has been published in or cited by academic journals more than 10,000 times.

Ubihere is just one of the success stories to come out of Converge Ventures. Converge Ventures’ unique model combines the latest R&D to come out of university research laboratories with the power of public-private partnerships to fund and commercialize groundbreaking technology that might not otherwise have seen the light of day. Converge Ventures has particular expertise in connecting leading-edge research with sources of non-dilutive capital; funding outlets that expand a startup’s coffers for development without reducing the founders’ equity and control of the company.

In effect, Converge Ventures helps close a virtuous circle for research — in Columbus and beyond.

“Startups coming from Ohio State often have a strong proof-of-concept and basic research funding,” says Cheryl Turnbull, senior director of the Keenan Center for Entrepreneurship at Ohio State. “While the university Board of Trustees committed $100 million to invest in a series of central Ohio-based funds to support these startups—we also encourage our startups to pursue non-dilutive funding sources and other outside investment to help take these technologies to market where they can have an impact on society.”

This round of funding for Ubihere is only the latest this year: Earlier in 2020, Ubihere received an $875,000 contract from the Air Force in connection to its work at Dyess AFB, in addition to venture capital and non-dilutive funds raised from Columbus-based Rev1 Ventures.

To learn more about the investment; or about Converge Ventures or Ubihere in general, please visit convergevc.com.

About Converge Ventures
Converge Ventures, based outside of Columbus, Ohio, is a unique high-tech startup model that identifies innovative federally funded technologies around which to build high-growth startups. Executing a unique customer-driven startup model, Converge Ventures launches, funds, develops, and grows technology-based startups with the support of a highly experienced, multidisciplinary team of partners and advisors. Learn more at convergevc.com.

About Ubihere
Ubihere’s patented technology is the next-generation standard for asset tracking across an array of industries including health care, warehousing, and manufacturing. Ubihere’s AI, machine-learning-based system gives users precise location and tracking data in real time, and for low cost. The company is based on the technology developed by Dr. Alper Yilmaz, professor of geoinformatics at The Ohio State University. Based in Columbus, Ohio, Ubihere seeks to help transform business inventory management as we know it. To learn more, visit online at ubihere.com.