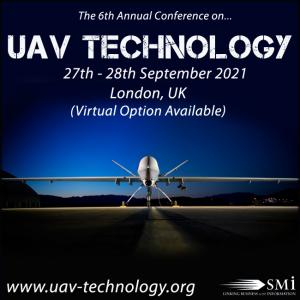 SMi Group Reports: Registration and the agenda are now available for the highly anticipated UAV Technology 2021 conference this coming September.

Interested parties can register by 28th May to save £200 at www.uav-technology.org/pr1ein.
This year’s UAV Technology Conference will have a highly anticipated speaker line-up which will include leading international air forces officers, program managers and technical scientists, who will be delving into the latest UAV technologies, challenges and requirements.

A preview of the 2021 speaker line-up is below:

The full brochure, agenda and speaker line-up is available on www.uav-technology.org/pr1ein.

About SMi Group:
Established since 1993, the SMi Group is a global event-production company that specializes in Business-to-Business Conferences, Workshops, Masterclasses and online Communities. We create and deliver events in the Defence, Security, Energy, Utilities, Finance and Pharmaceutical industries. We pride ourselves on having access to the world’s most forward-thinking opinion leaders and visionaries, allowing us to bring our communities together to Learn, Engage, Share and Network. More information can be found at http://www.smi-online.co.uk.