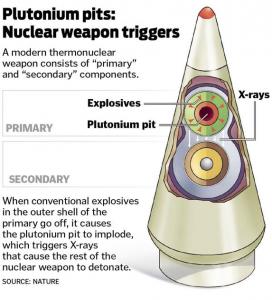 DOE is considering two sites – Los Alamos in New Mexico and Savannah River Site in South Carolina – for expanded plutonium pit production but has failed to first prepare the mandated Programmatic EIS. First new pits would be for the Ground Based Strategic Deterrent.

SRS Watch is a non-profit organization working on sound policies and projects by the U.S. Department of Energy. SRS currently stores 11.5 metric tons of plutonium and pit productio n would mean another 7.5 MT imported into South Carolina, where it could be stranded.

In Tuesday's letter, the groups say this lack of review violates the National Environmental Policy Act (NEPA) and would saddle already-burdened communities nearby the two DOE sites with significant quantities of toxic and radioactive waste, contravening President Biden’s executive order of making environmental justice a part of the mission of every agency.

“The federal government appears ready to embark on this significant change in U.S. nuclear policy without studying the cross-country risks and environmental justice impacts, which indicates that the health and safety of workers and downwind and downriver communities are being ignored,” said Leslie Lenhardt, a staff attorney for the South Carolina Environmental Law Project, a law firm representing the coalition.

The latter three groups intend to file an action pursuant to NEPA within 60 days if DOE and NNSA fail to reconsider its decision. The nuclear watchdogs have reached out on more than five occasions since 2019 to DOE and NNSA over the necessity of a broad, nationwide programmatic environmental impact statement (PEIS) on producing the nuclear weapon triggers, also known as plutonium pits. In its March 22, 2021 correspondence with the groups, NNSA said it has no plans to revisit its review of pit production, relying instead on a supplemental analysis of an outdated PEIS completed more than a decade ago, along with a separate review done for the Savannah River Site alone.

The coalition has numerous concerns, including the hundreds of billions of taxpayer dollars on the line, uncertain future radioactive waste disposal that could strand yet more plutonium in South Carolina, and the risk of radioactive and hazardous waste releases that could harm the predominantly low-income and African-American communities near SRS and the Pueblo communities around Los Alamos National Lab.

Beata Tsosie, Environmental Health and Justice Program coordinator for Tewa Women United, commented, “It is clear that communities impacted by nuclear colonialism need healing, strength and restorative justice. We know that the environmental violence our land-based and Native Peoples, ecologies and waters continue to endure from nuclear contamination will not end until the harm stops. It is imperative that the Biden Administration conduct a nationwide public review of its plans for expanded plutonium pit production that give affected communities a real voice in fighting for true environmental justice. It is our right that a commitment is made to get this done.”

Marian Naranjo, founder of Honor Our Pueblo Existence, said: “The Los Alamos National Lab is located on a geographically unsafe area for the work that transpires there, a place that is and has been considered as Sacred to Pueblo People since time immemorial.”

Tri-Valley CAREs’ director Marylia Kelley highlighted the national implications of NNSA’s decision to expand pit production. “The driver for the program is a novel warhead, called the W87-1, under development at California’s Livermore Lab that requires wholly new components including pits. The W87-1 and a new Ground-Based Strategic Deterrent missile to carry the warhead are both under scrutiny in Congress and within the Administration, which is just beginning its nuclear posture review. NNSA should conduct the necessary programmatic review to help inform these important decisions rather than try to outrun them.”

“To compound the lack of a thorough system-wide analysis of disposal of waste streams from pit production, the politically motivated Environmental Impact Statement on SRS pit production unacceptably waves off Environmental Justice issues without even so much as a cursory analysis,” noted Tom Clements, director of SRS Watch. “There is urgent need for preparation of a PEIS that does not marginalize environmental justice issues as a tactic used to justify a second factory to produce plutonium components for provocative and costly new nuclear weapons.”

Jay Coghlan of Nuclear Watch New Mexico commented, “Instead of maintaining the safety and reliability of the existing nuclear weapons stockpile, NNSA may actually undermine it because all future pit production is for speculative new-design nuclear weapons. This is a colossal and unnecessary waste of taxpayers’ money on top of already wasted taxpayers’ money.”

At SRS, the Plutonium Bomb Plant is proposed for the partially constructed plutonium fuel (MOX) plant, which was canceled in 2018 after a waste of $8 billion. The first new pits produced at SRS, which has no pit-production experience, or at LANL would be for the W87-1 warhead for the costly and unjustified GBSD, a new Intercontinental Ballistic Missile (ICBM). The next new pits would be for a new Submarine Launched Ballistic Missile (SLBM) with the W93 warhead. The groups anticipate Congress will eliminate cut those dangerous projects back when the Fiscal Year 2022 budget request is reviewed.

See SCELP webpage on the plutonium pit issue, with key documents linked at the bottom of the page: https://www.scelp.org/cases/plutonium-pits.